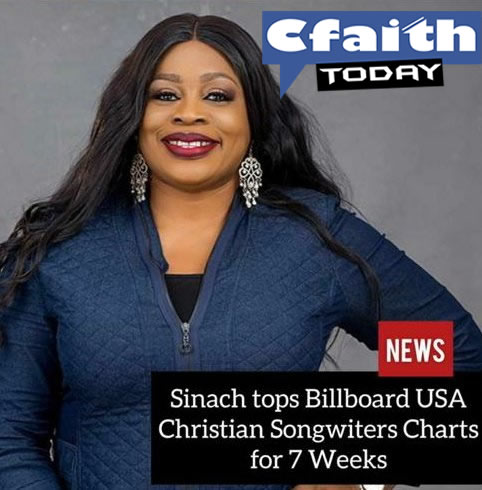 Nigerian gospel singer, Osinachi Okoro popularly known as Sinach has recorded another amazing feat. The singer is now rated by The Billboard Hot 100 as the no. 1 Christian songwriter in the world!.

The Billboard Hot 100 is the music industry’s standard record chart in the United States for songs, published weekly. Chart rankings are based on sales (physical and digital), radio play and online streaming in the US.

‘Waymaker,’ which was originally released in 2016 and produced by Mayo, recently gained massive popularity following performances by The Elevation Worship and other Christian rock bands.

But it was Leeland’s Waymaker (Live) that shot the song into Billboard Top 10 hits. Another version of the song by Michael W. Smith featuring Vanessa Campagna and Madelyn Berry also lit up the charts.

The singer is the first black African to ever hold such a record and couldn’t help but express her joy . In a tweet, Sinach expresses her happiness: ‘ so apparently we have been no. 1 on billboard USA for Christian song writer for 7 weeks!!. Look at God! First black person. First from Africa. So grateful to God’.

Fans of the singer showered her encomiums as she, in their words, is deserving of the record. She has recorded 9 Albums, and still serves as an international worship leader serving in her Church, Christ Embassy (Loveworld) till date. She was recently named as one of the top 100 reputable persons on earth, top female Artist of the Decade in Nigeria, enlisted in the Bethlehem Hall of Fame, and is the most streamed and followed Gospel Female Artist from Africa.

“Way Maker” has been covered by Michael W. Smith, Hillsong, Leeland, Bethel Music, and over 20 top Gospel singers today. Following her debut appearance in 2005 and life as a mother, wife and active minister, Sinach has successfully managed to be on top of her game.

Sinach has maintained the no. 1 spot on the list for seven weeks, topping Lauren diagle and Chris brown who are 3rd and 5th on the list respectively.

Well would you look at God!. Congratulations Sinach